A development model proposed for Pakistan based on freedom, equality, and sustainability.
A man holding Pakistan flag on the top of a mountain summit, image by @inkdrop

The aims of development will be centered around the notion of sustainable development so that the prime focus is on nurturing human capabilities. Humans are aware and capable enough to meet their needs, but not at the expense of undermining the needs of the future generation.

For this, human development broadly focuses on giving access to basic needs – with the specific focus on unleashing the true potential of individuals to make them productive citizens and compassionate beings. So they can rightly contribute towards the sustainable development of their country.

The development idea of giving freedom – access to all, for all opportunities – was proposed by Amartya Sen. According to him, development is removing the unfreedoms to give people a choice to live a life they value. In this sense, development is achieved by recognizing freedom as a means to provide economic opportunities, political and social facilities, and protective security to make individuals change-makers rather than recipients of benefits (Sen, 1999).

This alternative paradigm proposed a shift from “wealth production” as the end of economic activity to “humans” as the means as well as the end of development.

I wrote elsewhere in relation to human economy, Amartya Sen’s concept of ‘Development as Freedom’ has its roots in the Aristotelian account of the human good – which is directly related to the necessity to “first ascertain the function of man” and its further proceeds to explore “life in the sense of activity.” The “good quality of life” does not link with material goods, but as described in the Nicomachean Ethics – the practice of virtues – and in the contemplation (theoria) of divine things, leading to happiness (eudaimonia) (Aristotle et al., 2011). Sen would differ in this particular view of life as he leaves it as a frame to be filled by each member of society.

Development that intends to give equal opportunities to all, rather than merely focusing on economic growth due to income, would drive the society towards a more peaceful place to live.

As evident by institutional economists, equal opportunities for all against the elite coalition interests promote competition in economic and political domains. Individuals are incentivized to develop new methods and products, and the economy becomes more dynamic overall.

It gives the state the right to rule and control violence (North, 2012). The notion of freedom to individuals to access health, education, political and social opportunities makes them value their choices. It helps them discover their hidden abilities. This resultingly contributes to the country’s human development.

Moreover, development should be focused on equality of opportunity, rather than the notion of economic growth through inequality – which was the mainstream thought that has been overturned. The empirical research by Piketty (2013) has rejected the Kuznets view that inequality first rises, stabilizes, and then comes down, bringing economic growth in the presence of market forces. This is represented by a bell curve. Piketty has analyzed that for the rich, rates of wealth accumulation are larger and thus inequality widens.

Giving everyone the freedom to make choices and live a meaningful life should not be the only aim. This idea should be extended to the notion of rediscovering the human characteristics of caring for others.

In this regard, Hussain (2018) puts forth the alternative idea of nurturing compassion for others – the missing dimension of development. He signifies self-realization through the journey of love for other human beings and nature. He argues that human beings that find satisfaction in their relationships with others and nature should be the central aspect of the development of human capabilities, which then contribute to sustainable development.

The threat to the planet’s life support systems could be resolved if humans move beyond capital accumulation to concern for others and nature.

Along with the aim of equality for all, it is argued that the development aims should be aligned with religion – that is, the Islamic spirit – in Muslim countries. The development notion of looking beyond personal needs and wealth accumulation is aligned with the Islamic conception of sustainable development. Islamic notion emphasizes the responsible accumulation of resources according to one’s needs and in harmony with nature.

Qadir and Zaman (2018) shed light on sustainable development from the lens of Islam and found that United Nations Sustainable Development Goals are compatible with the Islamic spirit. In Islamic law, Muslims are responsible for guaranteeing the sustenance of ‘life, faith, mind, property and family.’

Islamic development concerns the spiritual growth of individuals as it accounts for the development of human character through soul purification (Tazkiya). Unlike material consumption and one’s desires, the Islamic worldview suggests sacrificing present consumption and desires for the harmonious coexistence between humans and the environment (Qadir and Zaman, 2018).

In a nutshell, in the concept of Pakistan 2047 development, practitioners should align the development aims with the notion of sustainability to focus on moving beyond income growth and harness human capabilities by providing equitable freedom of opportunities to all. Further, it would primarily focus on instilling human compassion. These all aims should be broadened by keeping in view the Islamic concepts of sustainability. 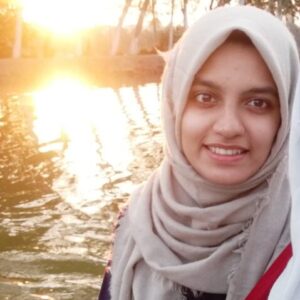 Ammara is a senior year student of BS-Economics with Data Science at Information Technology University. She is a research enthusiast; her research focuses on analyzing 21st-century challenges from the lens of systems thinking.
All Posts